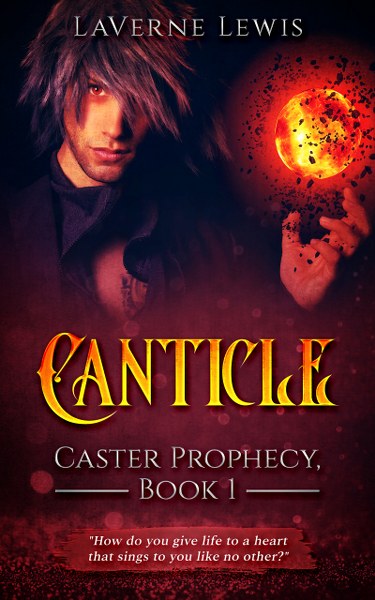 She’s a human with a busted ticker. He’s an ancient warlock. The only thing they have in common are birthmarks that flare to the point of pain when they’re together. But fate has other ideas…
Studying abroad despite her advancing heart disease, Leilani Gibson squeezes all the joy she can out of life. Literally bumping into the most handsome guy she’s ever seen while Christmas shopping should be the best thing that’s happened to her in quite some time, but she knows he’ll disappear when he discovers her secret.
Born into a family of Casters, Stellan Kierkegaard lives his life away from the reminder that he alone is the only one un-mated in his coven. When he collides with Leilani at a Montreal mall, his gallant attempt to get her to the hospital when she succumbs to congestive heart failure takes an unexpected turn. Now he’s forced to withhold some secrets of his own.
Stellan poses as Leilani’s fiancé until she gets the medical care she needs, but the more time they spend together, the more intense their feelings become as their birthmarks flare. If Caster prophecy is to be believed, and this reaction is only triggered in true soul mates, they must hide this fact from a trio of zealous Caster royals who have been tricked once.
The Caster couple who bears the foretold birthmark is prophesied to knit dark and light covens to lead the Caster World. Yet how can this be when Leilani is by every indication, mortal?
Goodreads * Amazon 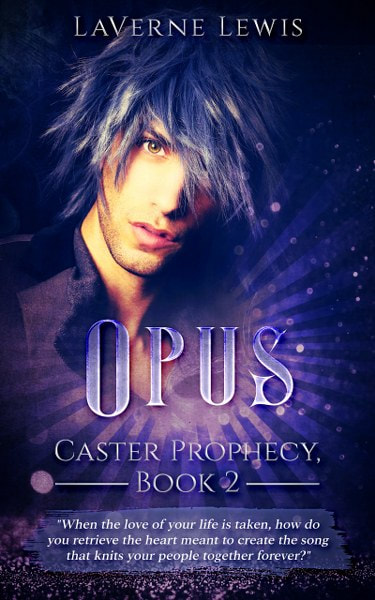 When the most precious Caster artifact goes missing, its retrieval becomes the difference between peace and civil war.
Powerful warlock, Stellan Kierkegaard was united with his Caster’s Canticle in Leilani Gibson, whom he believed to be human, but is actually an equally powerful Caster who’s been raised by human parents. During surgery to repair Leilani’s severely damaged heart, the power which someone had been siphoning from her since childhood was returned, revealing her true nature.
Now, the Kierkegaard coven is on the run from their governing body, The Hemlock Society, and the unknown person or persons who plotted to relieve Leilani of her power. Shortly after learning that the second half of the Caster Prophecy, the Caster’s Opus, has been stolen from the Hemlock Society in Stockholm, Leilani is kidnapped, sending Stellan into a Caster rage.
Will Stellan and Leilani retrieve the Caster’s Opus in time to join the Dark and Light covens together as prophesied, or will the Caster World descend into chaos?
Goodreads * Amazon 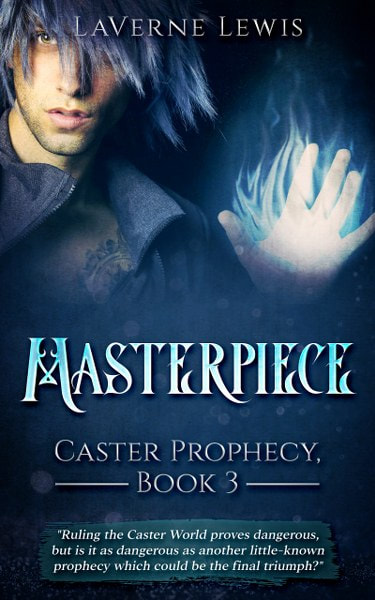 Ruling the Caster World proves dangerous, but is it as dangerous as a little-known prophecy which could be the final triumph?
Stellan and Leilani Kierkegaard balance marriage, governing an underground race of magical beings, and an investigation to discover who her biological parents are, all while completing their matriculation at an Ivy League school. It seems all too easy until their lead Caster investigator turns up dead, and every conceivable clue leads back to someone trying to keep her parents’ identity a secret.
When Leilani’s grad school bestie learns the secret they’re sworn to keep at all costs, things get even more interesting in their world, particularly, the fact that her in-laws may not share her views, or fondness for humans, when it comes to the existence of Casters in a world dominated by them. Combine all this with the discovery that there’s yet another prophecy which must be fulfilled in order for them to reign over the Caster World in relative peace and prosperity.
Will Stellan and Leilani have to make the same choice her Caster parents had to make to safeguard their legacy, or will prophecy protect their Masterpiece?
Goodreads * Amazon 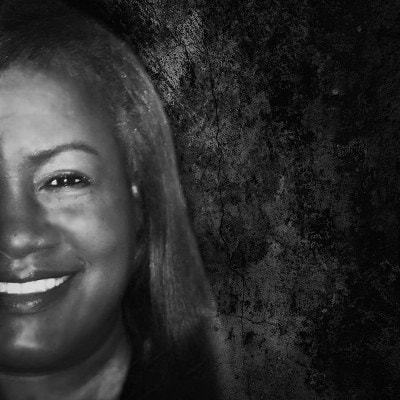 LaVerne Lewis grew up watching shows like Dark Shadows, Bewitched and later Charmed and Supernatural. Her favorite authors in the genre include Anne Rice, Stephen King, Karen Marie Moning and J.R. Ward which cemented her fondness for Urban Fantasy and the Paranormal. While she works by day in an office writing dry contract language, her love for Urban Fantasy compelled her to pursue writing the types of books she loves. Now she writes her own Paranormal Romance novels in the hope that someday her name will be synonymous with her idols’.
Website * Facebook * Twitter * Bookbub * Amazon * Goodreads

CANTICLE debuts TODAY, with a brand new cover and branding. The book is also FREE for KU subscribers!

So, if you’re interested in reading a sexy urban fantasy set during the Christmas Holidays, grab your copy of Canticle now! Just click the link below or my book cover and you’re ready to snuggle up with a fantasy that will warm your heart for the holidays.

She’s a human with a busted ticker. He’s a lovelorn warlock. When they collide over the Christmas Holidays an ancient prophecy is set in motion.

And if the first book piques your interest, the others will be published within weeks of the first, ensuring that you’re immersed in the Caster Prophecy world until the new year! Opus is available on November 28th, and Masterpiece on December 29!

When the most precious Caster artifact goes missing, its retrieval becomes the difference between peace and civil war.

Perfect for fans of Kami Garcia and Margaret Stohl, the Canticle, Opus and Masterpiece is the original and mysterious new adult fantasy series the Caster Prophecy.

Ruling the Caster World proves dangerous, but is it as dangerous as a little-known prophecy which could be the final triumph?

Masterpiece is the completely new finale of the trilogy.

From the middle of August to the middle of September, I’ve teamed up with a group of urban fantasy and paranormal romance authors to share some of our books with you for FREE!

So, if you’re interested in seeing what I and my colleagues have to offer, please click the link below or my book cover and check us out. You won’t be disappointed!

Perfect for fans of Sarah J. Maas and Victoria Aveyard, Dark Unicorn is the first of the original and mysterious new adult fantasy series Horn Sworn.

Princess Wrenyve knows her oath to return her Kingdom’s missing artifact, the Heart of Spellshallow, means one of the King’s children will die. Even if Wren is cunning, fast, and strong enough, there’s a good chance it will still be her.

Without the Heart, magic will flee the land faster than the night flees the day. Without the Heart, Spellshallow, and everything in it will cease to exist. As her brother’s shameful thievery is uncovered, Wren must swallow her pride and accept help from allies she knows she can’t trust:

Thackery is the ambitious son of the richest and most powerful councilman—her very ex, scorned lover—and the wounds Wren caused him are still raw.

Calen isn’t a boy at all. Trapped in human form after a hideous defeat, Calen may have lost his horn, but is still a unicorn—a self-serving, treacherous scoundrel, as dangerous to any man who crosses him as he is to the innocence of every fair maiden.

Luckily for Wren, she was already doomed.

To find the Heart and restore the magic, to retrieve the lost horn, Wren and her unfortunate travel companions must survive three separate realms—each more deadly than the last. Unknown enemies and strange magic hinder their way, and yet the most perilous thing is what lies within their own hearts.

For the month of August, I’ve teamed up with a group of paranormal romance authors to share some of our books with you for FREE!

So, if you’re interested in seeing what I and my colleagues have to offer, please click the link below or my book cover and check us out. You won’t be disappointed!

Prior to my return to writing and publishing my novels, there had been yet another paradigm shift in the marketing world for self-published fiction. Needless to say, I wasn’t privy to what transpired, so I just didn’t keep up with what was going on. I fell out of touch with trends, particularly as they pertained to marketing, which is the life-blood of successful independent authors.

Since I’ve been back, I’ve learned that none of what I thought I knew works anymore! Thankfully, I kept in touch with some of my contemporaries who have figured out how to maneuver in this new world of novel marketing. My first move at the suggestion of one of my longtime author friends, is to separate my contemporary romance and paranormal romance books into separate pen names. Thus, LaVerne Lewis was born. Yesterday!

I have changed my name on the cover of Book One of The Caster Prophecy and Book Two is available for pre-order and will soon be under my new nomme de plume. Thank you for all the readers who didn’t mind that I was dipping into two wells as L.V. Lewis. I hope that you will continue to read my contemporary romances if you like them, but if you’re also a lover of Urban Fantasy and Paranormal Romance, please give my new pen name a chance to continue Stellan and Leilani’s story, as well as new series’ featuring other supernatural beings.

I also want to welcome new readers who will be sent in my direction by reading my yet unnamed Caster Prophecy Prequel, which will be available to new subscribers signing up for my Laverne Lewis Newsletter.